Fall of the Tower of Babel

So, occasionally, I “feel” or “sense” patterns. Whether it’s divine, awareness, psychosis, or whatever, I don’t know.

With the release of Facebook’s “Translate” button, we’re on the verge of the world becoming a place of mutual understanding through communication, common goals of ’green’ movements, peaceful actions, sustainable living goals throughout the world, and people taking the time to listen and accept our differences.

When you get to the core, everyone wants to have food, shelter, clothing, take care of their family, spend time with their friends, and be free to pursue what makes them happy (or content). The how, what, and where of all of that is just details.

We are building something together that hasn’t been attained since Biblical times.

And that’s when I got the heebie jeebies. 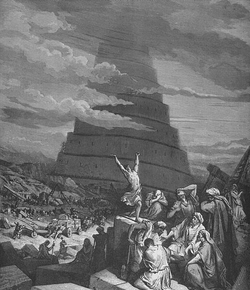 “Now the whole earth had one language and few words. And as men migrated from the east, they found a plain in the land of Shinar and settled there. And they said to one another, ’Come, let us make bricks, and burn them thoroughly.’ And they had brick for stone, and bitumen for mortar.

Then they said, ’Come, let us build ourselves a city, and a tower with its top in the heavens, and let us make a name for ourselves, lest we be scattered abroad upon the face of the whole earth.’ And the LORD came down to see the city and the tower, which the sons of men had built.

And the LORD said, ’Behold, they are one people, and they have all one language; and this is only the beginning of what they will do; and nothing that they propose to do will now be impossible for them. Come, let us go down, and there confuse their language, that they may not understand one another’s speech.’

At first I thought, “Man! I know it’s the OLD Testament and stuff, but…DANG! God’s a mean kid!”

My dad thought it was more of a deal where God made things difficult and challenging, lest things be too easy and we stagnate instead of grow.

I kinda liked that thought. Regardless, I had a sudden “thought” of the ’powers that be’ may cause our glorious modern day Tower of Babel, the internet, to some day soon…fall. Already in China, they have built a ’firewall’ around Tibet. Not to mention, keeping their citizens from communicating to other countries.

I’ll grant you, not ALL concern for global access is philanthropic in nature (we are a capitalistic nation, after all). However, more often than not, people just want to be understood, have their needs met and live in peace.

So…I hope I’m wrong. But all it takes is a couple of routers to go down and communication stops.

“What? I can’t check my email? What am I supposed to DO on my computer? Why won’t my iPhone download the map to the basketball arena?”

It would be hard to loose those connections we’ve built. Some of my good friends regularly talk to people across the globe they’ve come to call friends. In Ireland. Australia. England. All over.

Engraving The Confusion of Tongues by Gustave Doré (1865), who based his conception on the Minaret of Samarra